Fans of tough investigative journalism should probably avoid Channel 4’s How’d You Get So Rich? Presenter Katherine Ryan’s main tactic is to ask wealthy people how much they paid for something and, when they tell her, to repeat their answer in a tone of wondering admiration. Yet, despite her best efforts to keep it shallow, the programme does end up shedding some light on our peculiar attitudes to the very rich — and in particular our capacity to feel superior and inferior to them at the same time.

Ryan, a Canadian comedian who’ll be familiar to anybody who’s watched virtually any panel show, began Monday’s opening episode at the Shropshire pile owned by Steve Smith, the founder of Poundland. At first, the gratifying vulgarity of the décor seemed to offer us the promising chance for a good sneer. Sadly, though, Steve and his wife Tracey proved so unselfconsciously chuffed about how their lives had panned out that it was impossible not to warm to them. They also appeared to have changed little since the young Steve worked on his dad’s market stall. Having cheerfully declared that he painted all the grapes on the ballroom ceiling himself, he and Tracey then packed for a forthcoming trip to Majorca, making sure not to forget the teabags. After that, they flew by helicopter for a date night in a curry house. 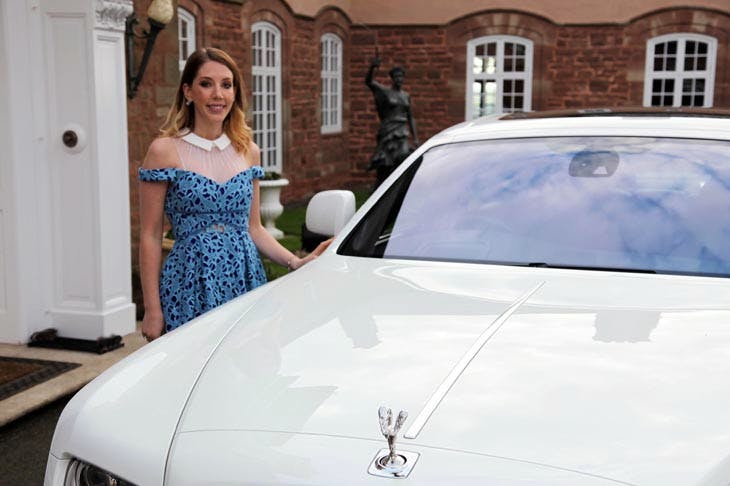 How’d You Get So Rich: Katherine Ryan

Not so appealing, mind you, was Ryan’s next magnate, Danny Lambo, a former pop star — of the big-in-Japan kind — who now owns a London hotel. ‘I’m actually known as Britain’s flashiest playboy,’ Danny explained matter-of-factly (and, just as annoyingly, a quick Google of the tabloids confirmed that he actually is). What this means in practice is that he drives around the streets of Chelsea in a Lamborghini, and when he spots an attractive woman, waves signs at her reading either, ‘You’re cute’ or less romantically, ‘Nice arse.’ Even so, he confessed in a voice of puzzled disappointment, most of his girlfriends turn out to be ‘gold-digger types’.

But to be properly rich, it seems, you need to spend your life — as Ryan put it with a welcome touch of asperity — breaking models’ noses. By far her wealthiest interviewee was Dr Raj Kanodia, an LA plastic surgeon, who, among other things, carries out 250 nose jobs a year at $20,000 a pop. The programme filmed him reassuring an anxious young knockout that he could indeed fix the unsightly, if almost imperceptible, bump on her nose. Ryan then observed, without apparent irony (or evidence), that he’s motivated not by money but by ‘a passion for beauty’.

For lovers of plus ça change moments, going from How’d You Get So Rich? to a three-part history of British photography on BBC4 mightn’t sound an obvious choice. Nonetheless, one thing we learned from Britain in Focus (Monday) is that Victorians having their portraits taken by commercial photographers would often ask for their nose bumps to be magically smoothed away in the darkroom.

Otherwise, this was much as you’d expect from a three-part history of British photography on BBC4 — i.e., richly informative and heroically unafraid of getting too technical. The presenter is Eamonn McCabe, a former Guardian picture editor, who gamely went a bit Lucy Worsley for the commercial-portrait section by donning a top hat and frock-coat. (To his credit, his heart never really seemed in it.) Fortunately, for the rest of the time, he stuck to being a middle-aged bloke who knows an awful lot about his subject, combining the wider historical developments with close readings of the most important 19th-century pictures.

Above all, he provided a startling reminder of how quickly photography evolved: from Henry Fox Talbot’s first tiny pictures of windows in 1835 to Roger Fenton’s images of the Crimean war just 20 years later. No other medium in history, McCabe persuasively argued, had ever gone from a standing start to a fully realised art form so quickly.

Finally, I’m happy to report that in its third series Catastrophe (Channel 4, Tuesday) — Sharon Horgan and Rob Delaney’s endlessly sharp comedy about the strange business of marriage and parenthood — remains something approaching a work of genius. Almost every line is still a perfect encapsulation of, if not what people say, then what they would say if only they were cleverer, funnier and more fearless. There’s the same immaculate intertwining of filth and tenderness, and the same ability to treat its characters in a way that’s both unsparing and sympathetic.

As a teenager discovering the joys of reading reviews (no, really), I remember being highly impressed by someone or other praising Chekhov’s gift for ‘finding the pain in comedy and the comedy in pain’. Now I’m older, I can’t quite decide whether that remark was pretentious or not — but I am pretty certain that it also applies to Catastrophe.

The illusion of ‘full employment’

Christianity in decline? Ask the Church why

The trauma of being 5ft 8 ½ inches

Ardern: 'war is never the answer'